“The Robles family has sold tortas in downtown Mexico City for over 70 years, earning generations of devoted customers. But this year could be its last.

Their story begins in 1940s Mexico City, at the intersection of Doctor Mora and Juárez Avenue, the southwestern corner of the Alameda Central. Diego Rivera immortalized the famous park, the first of its kind in Mexico City, in a 1947 mural, imagining over 100 seminal figures from Mexican history strolling through the grounds.

On a sunny summer morning at Tortas Robles in Centro Histórico, Guadalupe Robles points to a photograph from that same year, 1947. The photo captures her father, Alejandro Robles, leaning over the cart from which he sold tortas. ‘That’s him, in the beret,’ she says fondly.”

After publishing this story last week, Culinary Backstreets decided to sponsor a “Tortathon” at Tortas Robles, an hour of free tortas for all. Partnering with the neighborhood organization 06000 Neighborhood Observatory, CB helped bring visibility to the Robles’ fight to stay in Centro Histórico in the face of gentrification. The event, on September 5, was a huge success. Over 200 tortas were served and more than a dozen Mexican media outlets covered the story, bringing added addition to the looming eviction of the Trevi building. 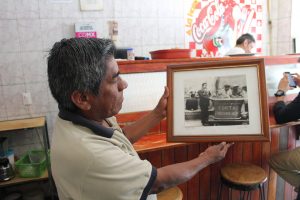