During my reporting trip this fall in Guatemala with the International Women in Media Foundation (IWMF) I reported on the country’s pervasive pollution problems. Looking into air pollution, I followed many a dirty tailpipe to understand why authorities have failed to regulate vehicle emissions. Here’s the result, published in How We Get To Next this week.

“El Trébol, ‘The Clover,’ is a tangle of highways and roundabouts in Guatemala City, where traffic grinds to a halt during the morning and evening rush hours. Colorfully-painted buses and cars compete for traffic lanes, as major avenues intersecting at El Trébol bring commuters and commerce into the city. The buses bring passengers from rural Guatemala and the broader urban area, dropping off riders who then make a beeline toward their destinations.

Like many cities in Latin America, Guatemala City has grown rapidly since the 1970s. At the same time, the city’s 3,000-strong bus fleet is aging. When cars and school buses in the United States no longer pass emissions tests, they go up for auction, and enterprising operators from countries like Guatemala and Honduras drive them south. These ‘clunkers’ are banned on American roads, but they’ll go on to work for years in Guatemala. Mechanics may refurbish the vehicles by adding fresh paint or more powerful motors — and by removing catalytic converters, even though the devices reduce pollution and are legally required in Guatemala.” 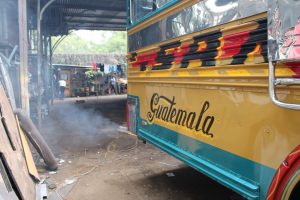