Last week Yale E360, an environmental outlet based at Yale University, published my feature story on the miraculous maize of Totontepec, Oaxaca. The story was also supported by the Food and Environment Reporting Network.

This story developed over the past five months, from a personal curiosity into a full-fledged investigation that took me to small-town Oaxaca, Mexico City bureaucrat offices, and a rural research institute. At the heart of the story is a question–

“A nitrogen-fixing maize grown in an indigenous region of Mexico has the ability to fertilize itself, recent research shows. Now, as a global company and U.S. scientists work to replicate this trait in other corn varieties, will the villages where the maize originated share fairly in the profits?” 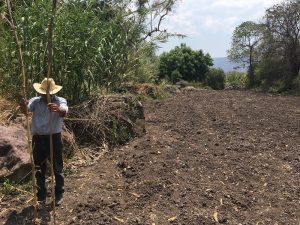