In my first article for CIGI Online, I wrote about the conundrums facing president-elect López Obrador as NAFTA renegotiations come to a close:

“Andrés Manuel López Obrador has never minced his words when addressing US President Donald Trump — until now, that is.

‘I think that it is worth making an effort to conclude the renegotiation of the North American Free Trade Agreement [NAFTA],’ López Obrador wrote in a letter to Trump, made public on July 22. He closed the letter comparing himself to Trump: ‘We both managed to put our voters and citizens at the center and displace the establishment or prevailing regime.’

The Mexican president-elect struck a remarkably conciliatory tone for a politician who wrote a book titled Oye, Trump (Listen up, Trump!) following the 2016 election. But the letter did little to resolve the doubts that swirl around NAFTA renegotiations, which resumed on July 26 in Washington, DC. The negotiations are the first important test for what is bound to be a fraught relationship between the two anti-establishment politicians.” 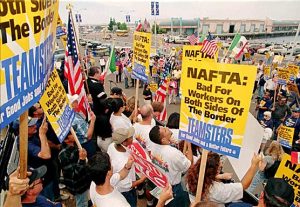