“In a sparsely furnished office overlooking dozens of buses at the Zone 21 depot in Guatemala City, Jorge Castro flips through photographs on his mobile phone. He settles on one.

‘There’s the bus when I bought it in Maryland,’ he says proudly. It is a blue and white bus emblazoned with the words “Ride On”, the name of Montgomery County’s public transit system.'”

I wrote about how one bus from Rockville, Maryland ended up all the way in Guatemala City. While vehicle emissions have tightened in the United States, developing countries often lag behind. Their pollution problems trace back

Read the full article on The Guardian Cities. 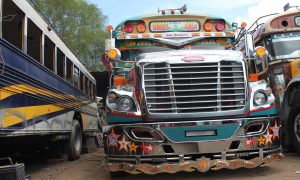