I wrote for The Atlantic‘s CityLab about targeted violence against Mexico’s mayors and local candidates. In the lead-up to the July 1 elections, 48 candidates were killed around the country.

“Antonia Jaimes Moctezuma was in her restaurant, El Toreo, in Chilapa, Guerrero on February 21 when two men on motorbikes pulled up to the restaurant and started firing shots. She was hit four times and killed.

Jaimes Moctezuma was running for a seat in the state assembly to represent the 25th district of Guerrero for the Revolutionary Democratic Party (PRD). Four days later, the Revolutionary Institutional Party (PRI) candidate for the same assembly seat, Dulce Nayeli Rebaja, was also killed. Neither murder has been solved.

On July 1, Mexico holds federal, state and local elections: 1,600 towns and cities will elect new mayors, out of more than 3,000 posts up for election. While presidential front-runner Andres Manuel López Obrador has inspired hope in many Mexicans and taken a strong lead in the polls, at the local level, many campaigns are trailed by fears of deadly violence.”

The full article is on citylab.com. 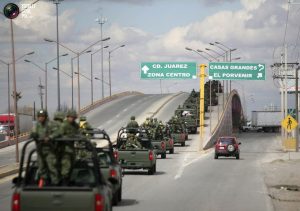