I wrote for The New Republic about how Andrés Manuel López Obrador’s plans to shake up national strategies to combat drug-trafficking.

“On Sunday, an unconventional candidate prevailed in Mexico’s presidential election, preaching forgiveness, instead of punishment, for Mexico’s drug war criminals.

In debates and campaign ads, left-populist Andrés Manuel López Obrador’s opponents attacked his security proposals, including his call to offer amnesty for certain drug war crimes. While many details of the president-elect’s proposals have not been defined, what’s clear is that López Obrador, who won in a landslide, is poised to make a drastic departure from 12 years of heavy-handed policies against the drug trade” 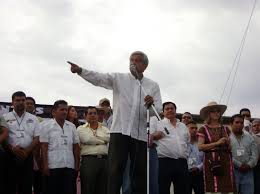