I wrote a book essay for Longreads about Patriot Number One by Lauren Hilgers and The Far Away Brothers by Lauren Markham. Both books trace the stories of recent immigrants to the United States, from China and El Salvador respectively. I weave in my own experience working with migrants in Mexico. These two books go beyond the day-to-day headlines on immigration to understand the forces pushing people out of their home countries.

“The attention paid to the U.S.-Mexico border seems to ebb and flow like the tide. News coverage spikes and then recedes, giving the impression that migration itself must be doing the same, when in fact the number of undocumented immigrants in the U.S. has been stable for the last 10 years. In summer 2014, it was the wave of unaccompanied minors arriving from Central America drew our scrutiny. The year 2018, as in so many arenas, brought new horrors, with young children forcibly separated from their parents and the ensuing debacle of reunification.

I spent the first few months of 2014 as a volunteer at a migrant shelter in Ixtepec, Oaxaca. On the side, I was dipping my toes into journalism, pitching to small non-profit websites. On a typically sticky afternoon in Ixtepec, I asked the priest who runs the shelter, Alejandro Solalinde, what changes he had seen so far that year. More children than ever, he said. And more of them coming alone. I wrote about the rising number of unaccompanied minors for the Americas Program that April.

Just a few months later, I watched with a mix of relief and bewilderment as international media flocked to the U.S.-Mexico border to cover the full-blown controversy. Few outlets had bothered to look at what had been apparent in refugee shelters in Southern Mexico for months: minors travelling solo. Only when these adolescents and children arrived on the doorstep of the United States did their situation become a “crisis” meriting media attention and presidential action. But then as now, Central American migrants were compartmentalized, and their stories simplified for easy consumption.” 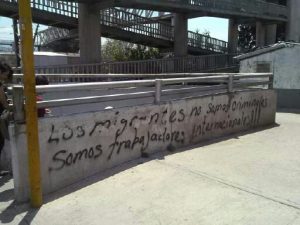