This is a long read, for DeSmogBlog with Steve Horn. We look into Sempra’s, a San Diego-based energy company, plans to install a Liquified Natural Gas (LNG) export facility on the Pacific coast of Baja California. The plant would export fracked gas from the US. LNG export plants on the West Coast have been shot down by protests, and Sempra so far has avoided public scrutiny. There is already an LNG import facility at the site, which local residents, fisherman and surfers opposed when it was built over a decade ago.

“The Costa Azul liquefied natural gas (LNG) import terminal sits on an isolated stretch of the Pacific Coast north of Ensenada, Baja California, in Mexico. When Sempra and its Mexican affiliate IEnova sought to acquire the land in 2002, the site’s remoteness worked in their favor. It was only frequented by fishermen, a few surfers, and a handful of beach-front property owners.

‘That was the last stretch of coastline between Tijuana and Ensenada that was pristine and undeveloped,’ Bill Powers, a San Diego-based energy engineer and founder of the Border Power Plant Working Group, told DeSmog. ‘There was just a little fishing village.’

After breaking ground in 2005, the Costa Azul LNG plant opened in 2008. Despite Sempra’s messaging strategy that the U.S. was running out of gas, the terminal has imported limited amounts of natural gas since. Now, San Diego-based Sempra hopes to build an LNG export facility at the same site.”

Read the full article on DeSmogBlog. 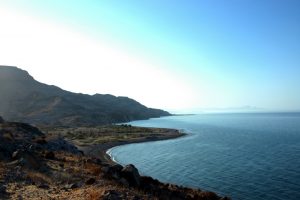