I wrote for The Verge about Mexico’s fake news problem in the lead-up to the July 1 elections.

“‘SCANDAL!!,’ read the Facebook post of Mexican comedian and journalist Jorge Roberto Avilés on March 6th. ‘The government of Venezuela has confirmed on its television station (Venevision) what we all already knew: Nicolás Maduro is behind Andrés Manuel López Obrador’s campaign.’

Accompanying the post was a video that proved what opponents of López Obrador, a three-time Mexican presidential candidate, had long claimed: López Obrador was a crony of the Venezuelan Chavista regime, and his latest presidential campaign — which culminates with the upcoming July 1st presidential election — was propped up by a foreign regime. The video features the logos of Venezuela’s state-backed television station Venezolana de Televisión (VTV) and depicts a newscaster saying, “With the triumph of this Latin American leader on July 1, the Bolivarian Revolution will have a first-rate ally in the continent to confront international attacks.” 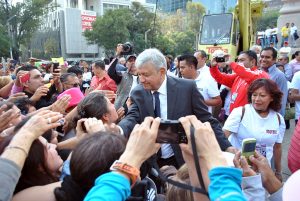